A night of illusion that found Ecco2k fully embracing the newest iteration of his persona.

Walking into The Garage from the rain-soaked streets of Highbury triggered the classic delirium that comes with entering a concert hall; anticipation becomes real and all chatter is silenced by the painful ring and weaponised bass of the speakers. Instantly I was amongst five hundred people united by the same purpose – Ecco2k’s first headline gig in London .

It’s fair to say Ecco2k – born Zak Arogundade – has had a busy couple of months. He took the reins of Drain Gang’s album, “Trash Island”, in September, before dropping his own album “E” a couple months later. Shockingly, after years of relative silence, Ecco2k had shot up into the role of critical darling. He received favourable reviews from Anthony Fantano and Pitchfork, as well as a typically rabid reception from fans. His tour, which began in January, makes physical the abstract concept that Ecco2k has become. 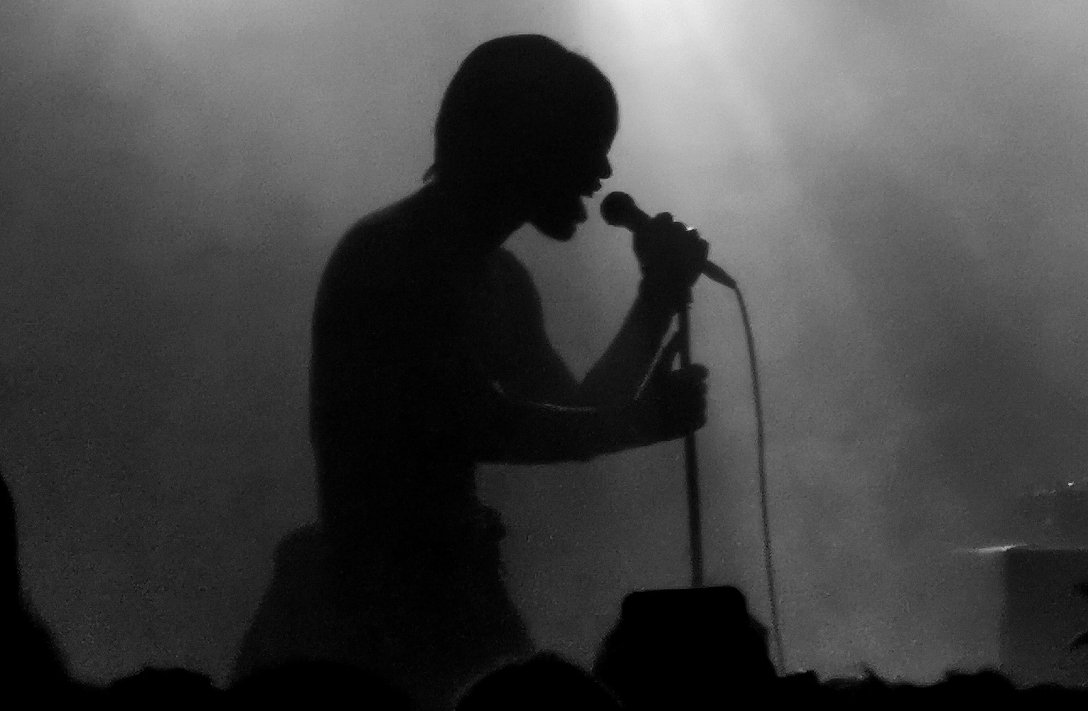 Paralysis was the overwhelming feeling upon first entering the venue. Kamixlo was in the midst of his opening DJ set, blasting some hellish variation of “Crank Dat (Soulja Boy)”. Green lights turned to red, red lights turned to darkness. The crowd seemed to like it, but I was stunned rather than invigorated, immersed in the choices Kamixlo made throughout his time on stage. A sea of people walked the tightrope between expectation and impatience in the interim between sets. The mood was ready, but mostly subtle – besides one guy screaming “DRAIN GANG!” at the absolute top of his lungs.

Ecco entered to screams and applause, obscured by outward facing lights and the storm of dust kicked up by the fans. “GT-R” launched from the starting line at mach speed, followed up by the sparkling anthem “Black Boy”. Opening with two cuts from nearly three years ago was a surprise, considering how deeply Ecco2k has embraced “E”, but the songs were almost re-contextualised by the monochrome setting and ferocious audience. Both tunes deal heavily with uncertainty stemming from the unpredictability of the future. But Arogundade is at the top now. From a position of success the warnings of “Black Boy” turn to nostalgia and the “whatever happens happens” tone of “GT-R” speaks to fun and adventure rather than pessimistic nihilism.

“Cc” and “Fragile” were both intriguing, supported by the visual of Ecco cast in black, moving as if puppeted around the mic stand, jumping on top of tables and into the floor. Kamixlo and what could’ve been a few others hovered on stage right, so far back in the smoke they became ghostly. The rapid-fire bars of “Calcium” sent people flying across the floor’s various pits. “Peroxide” was the night’s natural climax; Ecco dedicated a great amount of time to restarting, looping, and altering the track, yelling “Crush, crush” at intervals as the crowd echoed “What the fuck are you looking at?”. Even those in masks weren’t immune to “Peroxide” and it’s epidemic hook, the entire room bathed in a heavenly chorus. I was elated.

The latter half of the set brought no slowdown. “AAA Powerline” was a highlight, hypnotic to an extent which made the song’s four minutes fall away effortlessly. “Time” and “Blue Eyes” were an unholy mesh of fear and primal anger, the crowd kicking up violently as Ecco2k threw himself around the stage. The calm mood previously set was shattered like stained glass, an oddly placed sensory reset just before the night concluded. The atmosphere of the night was so oneiric that I’m unsure which song was played last, but with that said, “Girls just want to have fun” felt like a parting gift. In a night of audiovisual extremes “Girls” is the performance that has stuck to me the most. Picture Ecco crooning in stratospheric tones over the song’s warped beat, the crowd going crazy for melancholic euro-pop bliss. Soon afterwards Ecco2k left the stage the way he entered – no words, no goodbyes, just an all too abrupt return to reality. The hundreds on the floor were no longer united, we stood there stranded, trying to piece together what had just occurred.